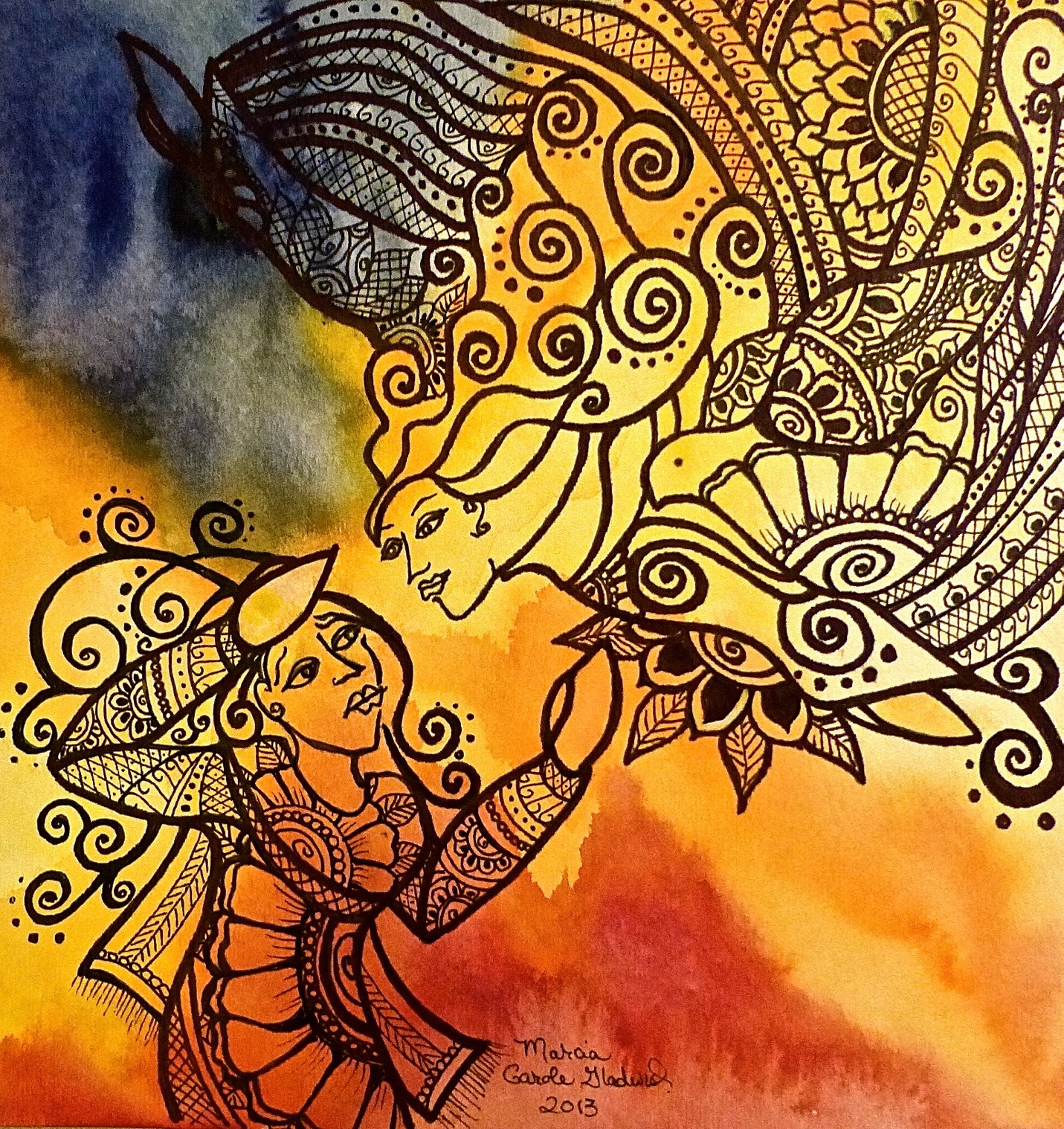 The Annunciation is a celebration of good news, yet very troubling news. The angel Gabriel announced to Mary that she has been chosen, “highly favored” to be the mother of the incarnate God, Jesus. After a bit of discussion, and “how can this be” type questions, Mary yields to the loving will of God, and states simply, “I am the hand maiden of the Lord.”

For this piece, I began with fiery watercolor yellows. Heaven has come to earth! (The rescue mission for mankind has begun!) I have used large flowers for Mary, suggesting she is a virgin, along with a typical Indian dupatta. She shows surprise in her face at this news because she has not been with a man. I have portrayed Gabriel as a creature who is powerfully breaking through into earth from heaven. I have used many mehndi symbols and forms in Gabriel’s attire in order to portray the concept of rich other-worldliness. I have also suggested the presence of the Holy Spirit through the dove woven into Gabriel’s attire.

Luke 1:26-38 Six months later in Nazareth, a city in the rural province of Galilee, the heavenly messenger Gabriel made another appearance. This time the messenger was sent by God to meet with a virgin named Mary, who was engaged to a man named Joseph, a descendant of King David himself. The messenger entered her home.

Messenger: Greetings! You are favored, and the Lord is with you! Among all women on the earth, you have been blessed.

The heavenly messenger’s words baffled Mary, and she wondered what type of greeting this was.

Messenger: Mary, don’t be afraid. You have found favor with God. Listen, you are going to become pregnant. You will have a son, and you must name Him “Savior,” or Jesus. Jesus will become the greatest among men. He will be known as the Son of the Highest God. God will give Him the throne of His ancestor David, and He will reign over the covenant family of Jacob forever.

Mary: But I have never been with a man. How can this be possible?

Messenger: The Holy Spirit will come upon you. The Most High will overshadow you. That’s why this holy child will be known, as not just your son, but also as the Son of God. It sounds impossible, but listen—you know your relative Elizabeth has been unable to bear children and is now far too old to be a mother. Yet she has become pregnant, as God willed it. Yes, in three months, she will have a son. So the impossible is possible with God.

Mary (deciding in her heart): Here I am, the Lord’s humble servant. As you have said, let it be done to me.