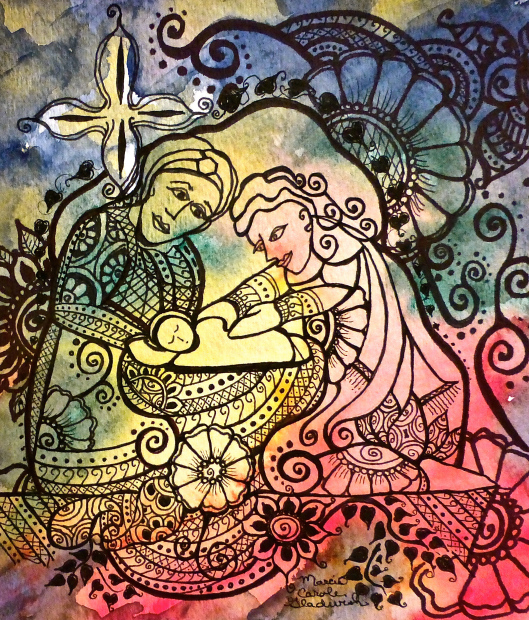 This is how the birth of Jesus Christ came about.
When his mother Mary was betrothed to Joseph,
but before they lived together,
she was found with child through the Holy Spirit.
Joseph her husband, since he was a righteous man,
yet unwilling to expose her to shame,
decided to divorce her quietly.
Such was his intention when, behold,
the angel of the Lord appeared to him in a dream and said,
“Joseph, son of David,
do not be afraid to take Mary your wife into your home.
For it is through the Holy Spirit
that this child has been conceived in her.
She will bear a son and you are to name him Jesus,
because he will save his people from their sins.”
All this took place to fulfill what the Lord had said through the prophet:
Behold, the virgin shall conceive and bear a son,
and they shall name him Emmanuel,
which means “God is with us.”
When Joseph awoke,
he did as the angel of the Lord had commanded him
and took his wife into his home. Matthew 1: 18-24

Front of my mehndi Christmas card.

Surely, Joseph had great faith in God – he obeyed Him in spite of the personal cost. People would talk and whisper about his decision to stay with Mary; he may have lost respect among the men in his community.  He must have puzzled many. Would he regain status as a man to emulate? Would he ever get out from under the shadow of Mary’s first pregnancy. He obeyed God, and yet, all may not have gone well for him within his community. (Have you ever made a decision to obey God, and others did not understand you, nor your decision?) There is often mystery involved with obeying God – obeying in spite of great obstacles, persecution, other people’s plans for your life. This mystery, although puzzling, is often how God works, and the very point where one’s faith begins to form deeper roots. God was sowing deeper roots of faith in Joseph.

I have seen much artwork with Mary and baby Jesus, however, I think it would be interesting to make some art about Joseph, in response to the above passage of the Bible. I imagine a work where Joseph is holding Jesus, looking at Him with love and tenderness – just as a new father holds his newborn child. Joseph must be knowing (it’s unfolding) more deeply that he is part of something much greater than his own personal story – a larger story. God’s story. What wonder and mystery is at work here.

Back of my mehndi Christmas Card.

In this rendering of the nativity scene, I have tried to bring out Joseph’s tenderness through his eyes – just a few lines to try to capture his love and wonder. I think, his thoughts of what others think fade as Joseph is drawn into God’s story – a humble Savior has come – and he gets to be a part of it! What a story he has because God has written Himself into Joseph’s story!

Therefore the Lord himself will give you this sign:
the virgin shall conceive, and bear a son,
and shall name him Emmanuel. Isaiah 7:14